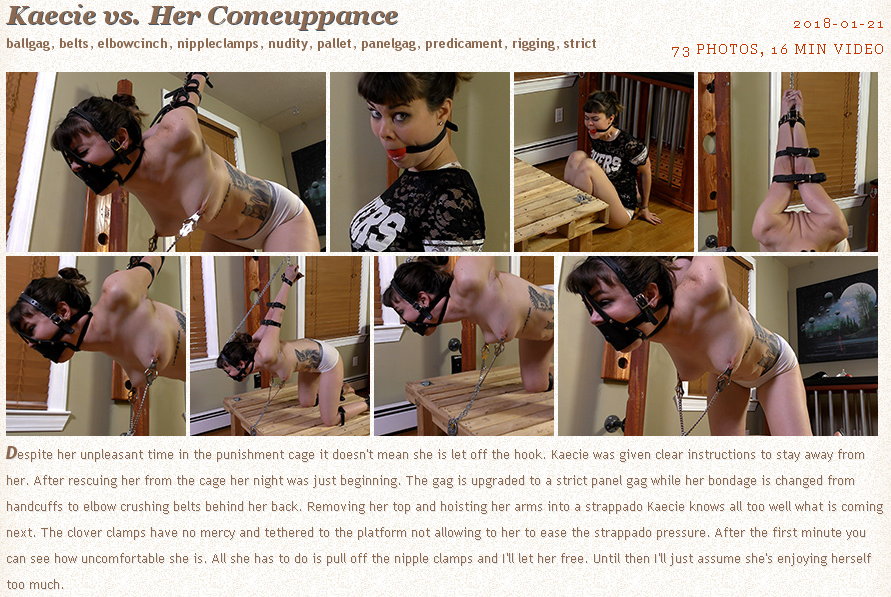 When Amber did finally return, Sasha was at the very edge.

'So how is my little bondage slut?' Amber asked, just barely touching the chain on Sasha's nipple clamps.

'Are these sensitive?' Amber cooed, bending down to lick them. 'I bet they are. I certainly remember how they felt yesterday.

Sasha tried to jerk away from Amber's tongue but it was impossible, all she did was to make the clamps move which sent shock waves up her body.'

'You're so sexy like this.' Amber whispered. 'Struggle for me.'

Sasha had no choice to obey. She couldn't imagine what would happen to her if she didn't. She began to move in her bondage. Amber grabbed on to her crotchrope and watched her.

She continued to lick her breasts and watched her as she twisted and turned in the tight ropes around her.

'I bet you would love me to take these off, wouldn't you?' Amber cooed.

Sasha's eyes widened. She wanted them off, but she also knew what would happen when they did. She screamed into her gag as Amber slowly opened them - letting the blood rush back into Sasha's incredibly sensitive nipples.

'That's a good girl.' Amber replied, kissing her nipple. 'Now I think I'll give you a little more time to enjoy this position while I get our next little game ready.

'MMMNPHNOOOO' Sasha squealed into her gag. It was pointless. Amber was already walking out of the room.