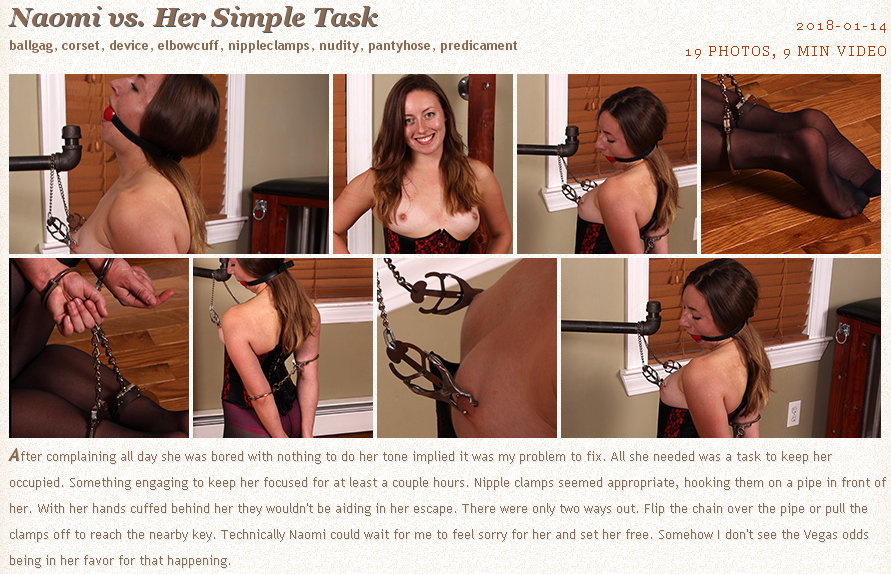 Margot had a key to the empty apartment...

She planned her self bondage carefully.

But she hadn't planned on dropping the key to the small lock that held her leather cuffs together.

She tried pulling down on the metal pipe but it was no use...she was stuck.

And with that blindfold robbing her of her sight, she couldn't see the two men standing there and unzipping their pants....

Selfbondage in the wood

So you were playing around and the key to your cuffs fell down in the leaves and you haven't been able to find it. Sounds aweful. Did you need help? What are you willing to do to get me to find them for you? Not enough, how about two out o fthree holes and I get to pick which ones? Unlock you first, nope, gotta exact payment before the good are delivered. Thank you, that was fun, but unfortunately, it is dark now and I cannot find the keys either. I will send someone back to get them for you in the morning. Have a good night out. (Hey Bob, there is this beautiful girl who locked herself to a tree out here )

"SHIT! That must be your husband! You can have the cross...it's only a few pieces of wood and some chain. Maybe he can find a good use for all this. I gotta get out of here before he finds me."

She had arrived home from work and rushed into the house to begin her self-bondage adventure.

She could barely concentrate on figuring out howto get free. Every few minutes she had to stop, balance herself so she wouldn't fall over, and ride out yet another orgasm. She was loving and hating every minute of this. Her only hope was that the batteries would run out soon. But all she could do was moan in anguish as she realized those fresh batteries had hours of life left.

She hoped she could outlast them...

I had a wonderful day of lounging around the house.Going through my closet, I found a box neatly and nicely wrapped My curiosity got the best of me and I opened it up. I wondered how he found out my deepest darkest scoret. But there they were...leather cuffs, a ballgag, a latex outfit, a collar and some sexy high heels and stockings!

I quickly put on the latex outfit. It hugged my body like nothing has ever done before. Then die silky stockings, and finally the high heeled pumps. At 6", they were very high and made my calves look great!

I sat on the couch and put the leather cuffs around my ankles and attached them together with one of the small padlocks that were in the box. Then I put the ballgag in It filled my mouth completely, like it had been made just for me. The collar was next. The sensation was incredible!

Finally, I put the cuffs around my wrists 3nd with a little effort, managed to click the padlock on them as well.

I sensually moaned as I got lost in the feeling of being held captive, unable to escape...unable to get free. My first orgasm oame suddenly. It caught me by surprise but was incredibly intense.

I laid back on the couch and admired how good my legs looked in sexy heels and stockings, and bound in leather.

Shannon couldn't wait to try out her new handcuffs...

She rushed home after work and stripped down naked. Having no plans for the weekend, she figured she'd have plenty of time to try out the cuffs in many different positions. Her boyfriend was out of town and would be back tomorrow night.

But in her hurry to feel the hard steel circling her limbs, she failed to put the keys within reach of her cuffed hands. Now cuffed to the bed, her only hope of getting free was going to be her boyfriend. And hearing his voice on the answering machine telling her he'd be away an extra day threw her into total panic mode. Her orgasm quickly took over as she silently starred at the keys mere inches from her face.

Lingerie and heels self bondage

Ashley put some effort into this... was obvious...

After picking the right lingerie and heels, she started tying her legs together.

While her chest was on the small side, her nipples were extremely sensitive. She was able to orgasm from having them played with.

She wrapped the rope around them and tied # off. She slipped in her gag and stopped to admire her work.

After several minutes of writhing around on the floor, the combination of her crotch rope and her now erect nipples rubbing on the Inside of her bra sent her over the edge. Her orgasm causing her to moan loudly behind her ballgag.

Just as she was enjoying the sexual release, she heard someone come up the stairs. She struggled to s# up and just as she focused on the doorway, her boyfriend appeared.

The smile on his face assured her that he was not only not mad, but this afternoon would turn out much better than she had originally planned.