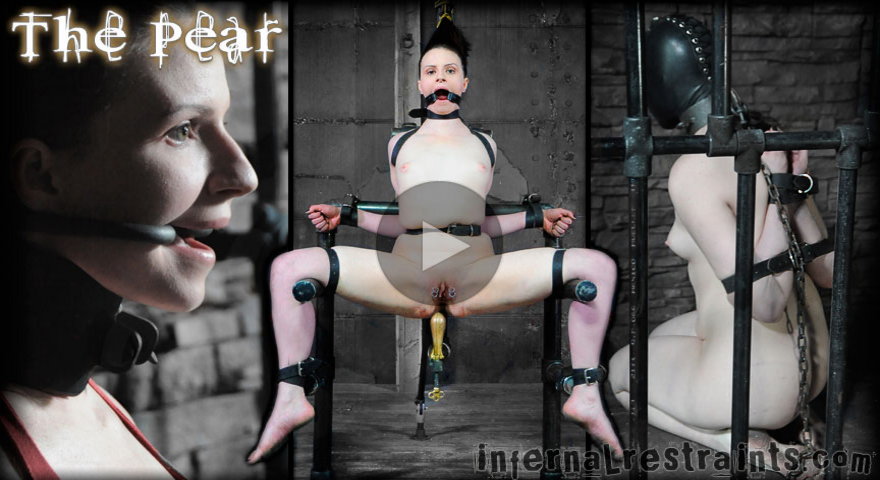 It was 9am on Saturday morning and I stood. Click! And I realised that I could do nothing …..yet. I had locked the final lock, the one that linked the short chain between my leather wrist cuffs to the D-ring on the back of my chastity belt. I looked down my nose across the room at the two small locked boxes screwed to the floor and saw my release method only a few feet away. The wax plugs in my ears rendered me virtually deaf and distorted time. It seemed like hours, yet it was probably about fifteen minutes, before the first drop of freezing water landed on the top of my head. This was followed by another, and another, and another…… My hair was becoming wet and sticking to the side of my face. I tried to shake my head but the 4inch posture collar holding my chin sky high also prevented any neck movement. 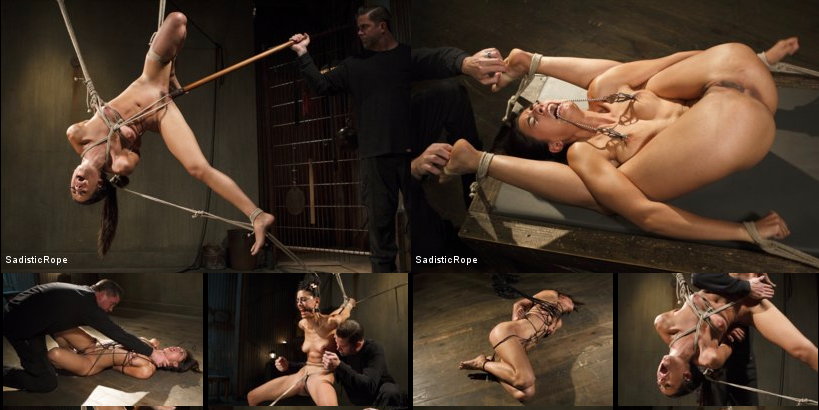 Cold drip after cold drip continued to land on the top of my head and my long hair was now annoyingly plastered to my cheeks and against my lips. I could not move my head and my body movement was severely restricted by the heavily boned bright red leather waist cincher corset, so I shuffled my feet quickly to try and dislodge my hair – big mistake. The sudden pain was so excruciating that I screamed yet I heard no sound. Whether this was due to the plugs in my ears or the locked head harness holding the large bright red rubber ball gag in my mouth I do not know. Both my ear lobes and my nipples felt as though they were being pulled off my body. The yoghurt container size block of ice above my head held three chains within its unyielding grasp. The first one was fixed to a plant hook on the ceiling, and the other two (each about a foot long) were attached to small padlocks through my pierced ears. I was held prisoner by my ears and subjected to this horrible water torture. The weights attached to the nipple clamps on my large boobs by short lengths of elastic were still bouncing, as were my boobs – definitely not a good idea! I quickly ruled out trying to pull on the chains and therefore had no choice but to wait until the ice had melted, with my head and hair getting wetter and wetter. The drool from my mouth ran down my chin and onto my chest. I had drunk two pints of water earlier (to prevent dehydration of course) and did I now need to pee! The thick bright red rubber tights I was wearing would hold everything in any prevent any mess on my bedroom carpet, but how humiliating! I managed to hold on, just!

My calf muscles were starting to cramp. Perhaps this was due to the court shoes with six-inch heels locked to my feet with the special leather ankle cuffs, those with the extra strap going underneath the heel. Also locked to each ankle strap was a two-foot spreader bar, and I had already learned the lesson about moving my feet too much! After what seemed like days the ice finally melted and the weight of the chains falling brought more pain to my ears. Still, I was now free – in a manner of speaking. All I had to do was get to the garage where the keys to the little locked boxes screwed to the floor were. Shuffle, shuffle, bounce, bounce.

I reached the bedroom door and turned round to open it. Yes I could reach the handle nicely with my hands cuffed behind me – I had practised this bit. And then the stairs! I had no chance of walking down them with the spreader bar and heels. It would have to be the bum method, but first to get sat down! I bent my legs as much as I could and then sort of rolled backwards. Once more the pain in my nipples, and the heavy chains hanging from my ears didn’t help much either. I struggled to a sitting position and placed my feet on the third step down. I inched my bum slowly forward and bump! I was sitting on the first step.

Bounce, bounce on my nipples, swing, swing on my ears and the sudden pressure on my bladder was just too much. I let go completely and the warmth flooded my pussy area, bum and upper thighs – thank goodness for the tights. Eventually I reached the bottom of the stairs and managed to stand up by pushing my back against the wall. The warm pee was now not so warm and gradually seeped down each rubber coated leg and settled around my feet and toes. It moved around with every shuffling step. 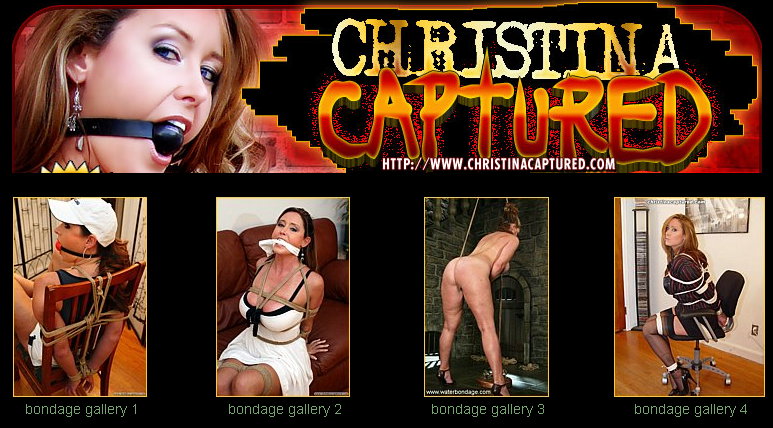 The kitchen clock said 11.30am and I had a big decision to make. How long would it take me to make the five yards of driveway to the detached garage?

Could I risk any of the neighbours seeing me dressed in locked on heels and spreader bar, bright red rubber tights and corset, nipple clamps with elasticated weights, bright red ball gag and posture collar, hands cuffed and locked behind me, wet hair and face, and drool drying on my chin and upper chest? My legs ached, my jaw hurt, my ears hurt and the torture on my tits was unbearable. I could not stay in this hell until it got dark at 9pm, and I still had a long way to go to get out of it! With the wax plugs in my ears I could hear nothing and I had to move my feet to turn round to see if the coast was clear.

I decided to risk it.

Shuffle shuffle, slosh, slosh, bounce, bounce, and swing, swing, but five minutes later I made it.

Turning round I opened the personal garage door, which had been left unlocked – I had practised this bit as well. I entered the garage to find two keys loosely tied to a piece of string, which was firmly attached to, and hanging down from the ceiling. By design, the first key was at the height of my hands. The second key was six feet high – there was no way I could possibly reach it with my hands behind my back! I untied the first key and, holding it in my hand, started the tortuous journey back to the house, up the stairs, and to the locked boxes screwed to the floor in my bedroom. It was easier going up the stairs than going down, but still bouncingly and swingingly painful. I got to the bedroom and lay on the floor – bend the legs, roll backwards and ouch! Still with my hands cuffed and locked to the back of the chastity belt, I manoeuvred the keys into the lock on the first box and click!

Opening the box, I had the keys to my wrist cuffs and soon had my hands free. Immediately, I brushed my hair back out of my face and wiped the horrible drool from my chin and chest. Then came the nipple clamps. The previous pain from the bouncing weights was nothing compared with that from the blood recirculation and I rubbed my nipples and tits vigorously to help speed up the process. Bad mistake!

The pain did subside and the rubbing combined with the thrill of my bondage was really turning me on. My hand naturally went to my pussy, my chastity belted pussy with the rubber tights over the top. Back to reality. I was still wearing the ball gag harness, posture collar, corset, chastity belt, ankle cuffs, heels and spreader bar, and those silly looking twelve-inch chains attached to my ears. I glared at the second locked box and thought of the other key in the garage which I could now reach. The rubber tights could not be removed completely due to my ankle cuffs and spreader bar and, considering the potential mess in my bedroom, I decided to leave them on.

With the use of my hands, the second journey to the garage was much easier as I could now “walk” down the stairs holding onto the rail, although still very sloshy. I soon had the second key and was back in my bedroom unlocking the other box screwed to the floor. The ball gag harness was removed first, followed by the spreader bar and ankle cuffs, and then the posture collar and earplugs. I went to the bathroom, took off the rubber tights and washed myself down with lovely hot water using the shower hose. This was like heaven and all I needed now was to masturbate myself to the orgasm I had deserved and earned. It was now 2pm. The corset had a zip up flap over the laces, which locked at the top. Chastity belts, well they sort of lock anyway! The keys to both had been posted second class to my home very early on Saturday morning. They would not arrive before Tuesday, after I had left for work. Saturday evening, Sunday, Monday and Tuesday are all going to be very interesting!