Headspace, I was well and truly immersed in Headspace when She came back in, crashing me back down to earth with a fresh burst of pain from the chastity device. She paused next to the bed, surveying the scene, I started beg for release through the gag, She answered me by brushing her hand gently over my chest, removing the nipple clamps as She went, making scream further into the gag.... ?Oh, does that hurt?? she replied in her sweetest kindest voice. Next came the leg chains, I stretched and writhed around as they were so stiff (I didn't know it then, but she'd left me like that for another six hours, making over ten hours in total!).

She climbed up, straddling my chest, pinning me down, then removed the gag and blindfold. Ah, I could see again! She was dressed only in a pair of panties, her hose and a black bra, and looked like a goddess from where I was still chained up. Reaching down, playing with my heir, She just sat there smiling, looking into my eyes, oh my!

?Right, now you're mine, we need to discuss how things are going to be, you're not going back to your old life, now you belong to me!?

?OK...? I replied, nodding and grinning away.

?I've been waiting for this for a long time, it's always been my fantasy to control a partner completely, and I guess by the look on your face you don't object! So, this is how it's going to be?, She paused, running Her hands down and playing with my nipples, teasing and twisting.

?We're going to be completely honest and open from this point on, you're going to tell me all of your perverted fantasies, and I mean them all!?, she emphasised this with an extra twist! ?And, if you're lucky I'll let you live some of them out whilst I play My games with you. I'm going to take the cuffs off now, but understand that you're mine, and nothing can change that!?, and with that She reached up and slowly took off the cuffs. Leaning back She patted the chastity device, and smiling, She said the words which to this day I know are still true, ?I think this can stay on though, I like this! I might let you out for some torture every now and then, but no relief for you now!?

Op my god, I could have burst right there and then, this wasn't just the one fantasy that came true, this was all of them rolled up into one with a few added bits. It was all I could do to speak in that moment - ?Thank you? I whispered, overcome with shock!

Listening to her fantasies, some of them were ?worse? than mine, She told me of Her early teenage fantasies where She would be the one in control, and would like to chain up her teenage pals, leaving them helpless in Her control. She told me about the punishments she'd like to use on me, and the things she'd like to try, including to my surprise peeing, i.e. watersports, something which I'd only fantasised about once many years ago. She told me that her desire to control people was one of the bigger things which had led to her becoming a Police Woman.

She asked me about pain, if I liked it and how much I would be able to take, to my shame, feeling like a slut, I told her my limits and what I'd tried in the past (You know, even those silly things you've all tried), before our relationship, oh I was blushing royally by the end I can tell you! She just sat there, laughing and smiling.

I went on further with my fantasies, telling her about what turned me on, some of which like the minor foot & shoe fetish She'd already guessed. She merely sat back and wiggled Her toes at me, and whilst I rubbed Her still hosed feet and legs, kissing her feet from time to time, She rubbed Herself gently.

I can't begin to tell you how this all felt. I was still reeling from when she caught me out earlier on in the day, and from being kept prisoner by Her for the first six hours of what would turn out later to be years. I felt more naked than ever. Never in my life had I told someone what I had told Her, always before, I mean always I'd taken great pains to hide everything I'd just blurted out. I felt incredibly vulnerable, completely out of control and unbelievably turned on!

We both agreed that night to begin not quite what you'd term a lifestyle or full on bsdm relationship, but a comfortable one where normal life would still continue, but with a lot of regular spice. I'd still keep my job, and not become Her slave outside of any playtimes. We agreed that She would be able to tell me what to do and I would obey her completely so long as it was understood that no permanent injuries would happen, unless we'd both agreed it in detail before hand! (I told you her fantasies were worse than mine!).

She said we'd go online-shopping the following day and hoped that our credit was up to the task at hand, as cages (Yes, cages) don't come cheaply (Don't look at me, I'm still amazed She'd even thought of it!)

?Would you like to play tonight?? she asked coyly.

In between kisses I nodded happily.

Standing up, She lead me into the dining room, and had me dismantle the table, leaning it against one wall with the chairs next to it, leaving a large space in the middle of the room.

?Right, I'm going to bind you here tonight, I hope you're feeling supple!? and Her grin was sexy-evil! ?I'll be back in a mo, don't move, love!?, and over her shoulder She called out ?Oh, and you can call me Miss Bitch whilst we play, to show your ownership!?, continuing Her way upstairs.

She leaned forward grasped my hair tightly, and pulled my head back, looking me directly in the eye, ?And...? she said... I horsely whispered, ?I want you to chain me up and torture me, please.?. Talk about naked desire, I was actually beginning to shake! 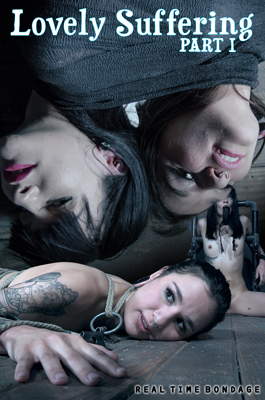