Being able to post my experiences on Gromet's site has reinvigorated my attempts to come up with new forms of self-bondage/torture schemes. My usually self-bondage activities usually include electrical stimulation of my penis while bound. I started with DC voltage ranging from 6 to 12 volts, but found that to be too painful and often left small electrical burn marks if I was not careful. Now, I enjoy using amplified audio signals. Instead of connecting the wires to a speaker, I connect them to two steel cock rings that are placed at the base of my penis.

From the Internet, I found amateur electronic pages that gave schematics for simple audio amplifiers that use a couple of 9-volt batteries to amplify signals from either computers or small cassette players. I use a sound editor on my computer to generate many different types of sound waves. Through experimentation, I found some waves that give a pleasant, deep, waving sensation, and other that offer pain without the pinching sensation of DC voltage. I built myself my own pain unit that used audio input either directly from the computer, or from a cassette tape. In either case, I would use a simple program to have the computer randomly play different sound waves. If I was going to do the self bondage session away from the computer, I could always tape a half hour session and play it back for self-torture.

I usually just put the rings on my penis, but I got an idea to create a restraint device that would hold my penis in place while delivering shocks. I started by taking a cock ring and attach two thin threaded bolts to either end. I used thin tin strips that wrapped around the ring, and had holes at the end of the strip for the threaded bolt to go through. Two small nuts held the strip securely to the bolt. The tin strip had to be bent at 90 degrees for the bolts to be lined up with the ring. When done, it looked like one long threaded bolt with a steel ring in the middle. I made two of these bolts with a ring in the middle. To keep them placed just slightly apart, I used wooden blocks with holes drilled about a half inch apart. The bolts were fed though the blocks of wood, and washers and nuts were used to hold the rings and bolts parallel to each other. The rings would eventually be placed at the base of my penis and held in place by a wooden base.

For the wooden base, I started with a smooth piece of plywood about three feet long and two feet wide. I would lie down with the plywood under my ass, and installed two upright pieces of 2x4s with brackets. The uprights were on each side of my waist. A long slot was in each upright to allow the cock rings and bolts to be raised and lowered, in order to be positioned just right.

I then took two vibrators and attached them to the threaded bolts, one on each side of the cock rings. The vibrators were attached using thick elastics and were pointing down and at an angle so they looked a bit like a V-shape, but not touching at the bottom. I put the cock rings on my penis and positioned the vibrators to press into the sides of my crotch, just below the base of my penis, and just above my testicles. Instead of using batteries, I hooked up each vibrator to its own AC adaptor, and plugged both adaptors into a power bar and plugged the power bar into a wall socket timer.

To finish off the cock restraint, I added one more cock ring and attached it to the two vibrators with heavy 12-gauge wire. The cock ring was positioned so that it would be held just below the base of the head of my penis. When the vibrators were on, all three rings vibrated, and the tips of the vibrator were pressed into the base of my crotch. I had built the cock restraint in the garage and kept it hidden for a couple of months, waiting for the right opportunity to use it. One day, I had a statutory holiday at work, but my wife had to go into work that day. I quickly set up a simple spreadeagle restraint system, and I used an electromagnet with a timer for the release key. For this session, I wanted the key to fall at a very specific time.

Before sitting down on the plywood floor, I took two screws and screwed the plywood board to the floor. We had a thick mixed dark colored carpet and the screws would not leave a noticeable mark. I sat down on the plywood board and attached chains to my ankles that held them about 3 to 4 feet apart. I then threaded rope through the eyebolts and laid down and tightened the rope to hold my legs and waist down to the board. I then smeared plenty of K-Y Jelly on my penis and wiped my hand on a towel. I put the bolt/ring/vibrator unit in the slots of the 2x4s and lowered the unit on my penis. With one hand I guided my penis through the rings and tried to do it quickly before I got too much of a hard on. I tightened the nuts with a ratchet (lying down, I needed the extra length of the ratchet handle to reach the nuts).

My penis immediately engorged and shifted around in the three cock rings. It was very different than just having them on my penis. I could not move much, but I could thrust my penis up and down a little and fuck the rings a bit. The rings held my skin in place, but my inner shaft rubbed along the rings.

All I had to do was reach up and chain my hands over my head and I would be stuck for the next hour. In about 20 minutes, a tape of audio sounds would start, which would deliver a range of different shocks of varying lengths and strengths. The tape was 45 minutes long on one side and would torture me for about 30 minutes. For 10 minutes after that, the audio signals would consist of low frequency signals that felt almost pleasant. They were 10 seconds long with a 5 second interval. The vibrator timers were set to go on at the same time as the low frequency signals. In exactly one hour, the keys would swing down and I would be able to release myself.

I raised my arms and my heart accelerated and I felt like I was going to have a panic attack. I lay with my hand over my head and tried to relax. As I began to manipulate the chains, I felt my heart racing again. I took several deep breaths and concentrated on the pleasant feeling of my penis held tight by the three cock rings. I wiggled and thrust my hips gently and began to relax. I calmly placed a chain around one wrist and threaded a padlock through the links. I did the same to the other wrist and then tried to relax again. With my eyes closed and my penis being gently massaged by the rings, I quickly clicked the left padlock, then the right.

My heart raced as I came to the realization that I had completed the self-bondage and was now resigned to the torture I had prepared for myself. I tested my bonds by pulling on my ankle chains and trying to remove my penis from the devilish device I constructed. Everything was held in fast. I laid back and tried to lose the erection in order to slip my penis out of the rings. From the moment I started the timers to the time I finally got my wrists chained, about 15 minutes had past. This only left 5 more minutes before the tape player would start. Every time my penis relaxed a bit, I felt it shift in the three cock rings, and the sensation would send a surge of blood to my penis and my erection was renewed.

The timer for the tape player went on and I heard the tape player click as it started. My penis reacted by stiffening up, anticipating the first shock. The first shock was mildly painful and lasted about 5 seconds. I squirmed and pulled at my bonds to no avail. The shocks came about one every 2 minutes for a total of about 15 shocks. I never knew when the next one would strike or how intense or how long it would last. The really painful shocks made me yell out in pain and made my body contract violently. Fifteen minutes into the session, I was covered in sweat and my ankles were sore from pulling at my bonds. After 30 minutes of torture, the vibrators turned on. I felt the vibrations throughout my genitals, all along my shaft and deep in my prostate. Within a minute, the tape player started sending the long low frequency signals, and I moaned with delight. I began thrusting my hips into the cock rings and stimulating myself further. When the signal stopped, my body relaxed, and then tensed up again as the signal came back on.

I continued to fuck the cock rings while the audio signals and vibrators brought me closer and closer to orgasm. I tried to make it last as long as I could, but after about three minutes, the orgasm began to build uncontrollably inside me. I began to thrust more violently felt the bond around my legs and waist pull tight with each thrust. My level of pain perception rose the closer I got to climax, and I was pulling tight against my ankle and wrist binds. I finally exploded and felt a shower of cum on my waist and chest.

As my climax subsided, the vibrations and mild electrical shocks continued making me squirm for mercy in my bonds. Unfortunately, no one was there to give me mercy. As my erection finally subsided, I felt both the vibrations and the shocks less. My penis fell out of the top cock ring; by I could not remove it from the lower two. I continued to suffer the mild shocks and vibrations until the escape key finally swung down and allowed me to release myself.

I stopped the tape and turned off the power bar of the vibrators. I slowly undid the nuts holding the bolt/ring/vibrator unit in place and gently lifted it up and off my penis. I then undid the ropes holding down my waist and then finally unchained my sore ankles. Everything was sore and I was covered in cum. I staggered to the shower and sat down under the water and soothed my aching body, especially my penis. Later, I dismantled my devilish device and wondered what I could possibly do next time to top this experience. I sure something will come to me. 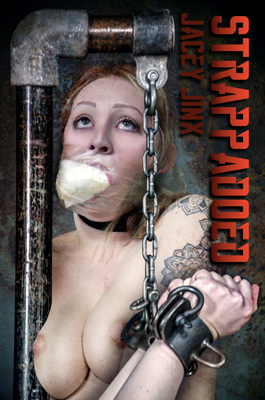