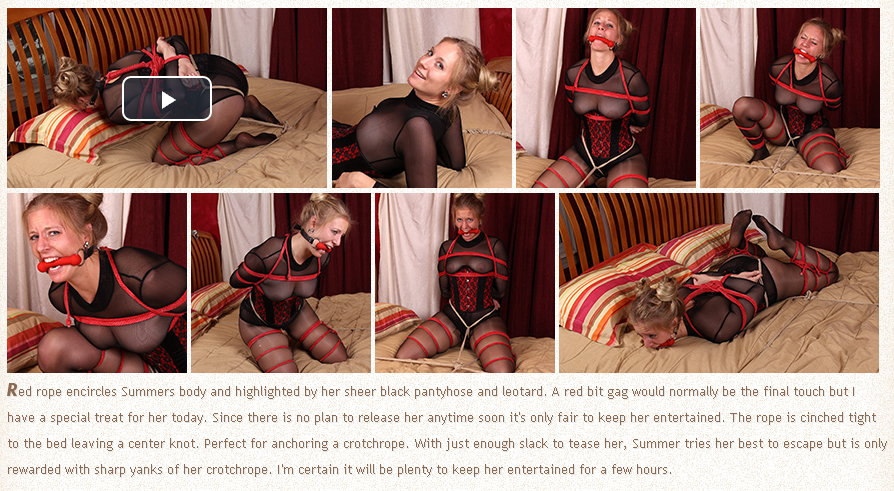 Once my three housemates had learnt that I was an ardent practitioner of bondage, it was only a matter of time before they took opportunities to talk about it with me.

Surprisingly, it was Emma who spoke to me first, choosing a moment when we were alone in the house. I say surprisingly because she had always seemed the most timid and conventional of us all.

I told her the story of my initiation into bondage, and of the pleasures it brought me. She was puzzled by what she had seen: “But, the way we found you looked very painful.”

“It was. I’m not into pain as pleasure, either giving it or receiving it. I learnt a major lesson from trusting that bastard. He won’t be hearing from me again.”

“I don’t think I could ever let anyone have that degree of control over me. The other way round perhaps.” Emma looked up at me. “If you ever need someone to tie you up, I’m game. I think I might like that.”

“I might take you up on that offer,” I replied. “I can do a lot on my own but, at least, I would be glad to have someone as a safety net, to release me if I can’t do it myself. I’ll think about it.”

Sally was the next and, typically, her interest was in what I could do for her. So it was that, the next evening I accompanied her to her boyfriend’s flat, to tie her up and leave her as a present for him. She stripped down to black stockings and black gloves, and I placed a ball gag in her mouth before completing the ensemble with a black hood.

Then I made her kneel down on his bed, admiring the black silk sheets as I did so, and tied her ankles to her thighs. I then got her to lie back and I tied her wrists to her ankles. As I stood back, to admire my handiwork, it occurred to me that Sally might not have realised how she would look – her legs, arms and head were as black as the sheets, so her torso stood out like an expensive sex toy. Still, she had been quite specific, so I left her as she was and left the flat, waiting in a coffee bar across the road until her boyfriend came home. Once I was certain he had gone in and would find her, I posted her key through the door, and left them to it.

It was over a week before she spoke to me about the experience, and then it was simply to ask me to do it again. When I asked how it had gone, her response was confined to a couple of sentences: “It's him who wants to do it again. To be honest, it doesn’t do much for me either way.”

Thus it was that, once again I ended up in his flat tying her up. This time I tied her elbows and wrists together behind her back, and tied her ankles to a brush handle so that she had to stand with her legs wide apart. I finished it off with a ball gag. Then I got her to hobble across to the bay window. The heavy curtains drew across the front of the bay, and there was a strong fitting in the centre of the curtain pole, to which I tied a rope. I faced her towards the window, and threaded the rope from the curtain pole through the knot at her wrists. As I pulled her wrists upwards, she bent forwards until her arms were almost vertical, and she was bent forward so that her back was horizontal.

In this position, her whole upper body had gone through the divide in the curtains and, as I re-adjusted the curtains, all that could be seen were her legs and rear end. It was clear that her boyfriend wouldn’t have to release her, if he wished to take her from behind. Everything was being presented.

Once again, I retired to the coffee bar. This time, however, because I knew what to look for, I could see her head in the window and, once her boyfriend came home, the curtains moved around a bit, but she was still tied there half an hour later when I posted the key and left. I reckoned she might be a bit sore before he released her. -o- 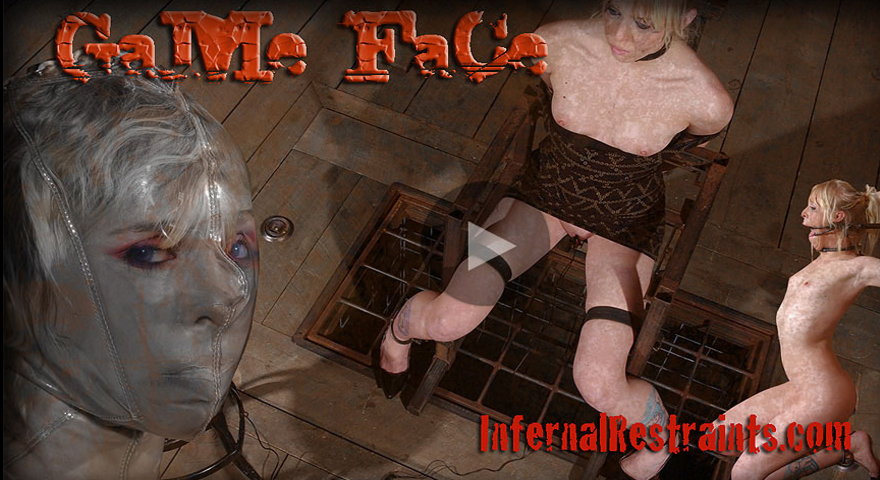 It was a little while before my third house-mate, Helen, approached me. When she did, I was genuinely surprised.

She presented me with a cane: “I was cruel to you when I found you tied up. I’m very sorry, and I want you to punish me.”

It was true that, when she had found me as I had been left by my now ex-boyfriend, in a fierce hog-tie, she hadn’t released me. Instead, she had replaced the batteries in the two vibrators which he had left inside me and which had thankfully long since expired, and left me there until my other two room-mates had come home and also observed my predicament. It was Emma who had released me.

I explained to Helen that I genuinely wasn’t into pain, either giving or receiving, and she seemed really disappointed, so I offered a half-way house.

“ I tell you what. I will tie you up and leave you for the others to find. They can decide whether you deserve punishment, and mete it out if they do.”

Helen was, like me, a yoga devotee, and she also still regularly attended a gymnastics course at college. Knowing this, I got her to strip down to bra and knickers, and tied a rope round her waist. I got her to lie on her back on the same table in our kitchen where she had found me. Then I got her to bring her legs up and to fold them behind her shoulders. I tied her ankles together there. Then I lifted her legs and rolled her over onto her front. Now I could tie her wrists together behind her back, locking her in that position. I also tied her wrists to the rope round her waist, so that there was no possibility of her sliding her hands over her backside to release herself.

When I rolled her onto he back again, her backside was presented for all to see. My final contributions were a ball gag, the cane and a note saying:

IF YOU THINK I SHOULD BE PUNISHED FOR HOW I TREATED MICHELLE, YOU HAVE MY PERMISSION TO DO SO.

I then retired to my room to await developments. What I had done to Helen had started to turn me on, so I decided to put myself in the same bondage. I used ankle cuffs to lock my ankles behind my neck, fitted a ball gag in my mouth, and then used a pair of handcuffs to lock my wrists together behind my ankles. The keys were beside me on the bed, so that I could release myself when the time came.

As I lay there, I heard the front door open, and shortly afterwards, I heard Sally’s laugh, followed by a series of three thwacks with the cane, each followed by a muffled squeal. Clearly Sally was prepared to give what she had probably received from her boyfriend whilst in bondage. I suspected that Helen was starting to regret what she had proposed.

Sally wasn’t in the house for long. It was only a short while before I heard her shutting the front door as she went out, and Helen and I were left to our fantasies. It was quiet for some time, and I was starting to think of releasing us both. Then I heard someone come in and, shortly afterwards, my door opened. Emma came in and immediately walked over to where I lay on the bed in my manacles, and took hold of the keys. I was now as much a prisoner as Helen.

“I was going to ask you if I could borrow some of your gear, but it appears you don’t have any choice.” 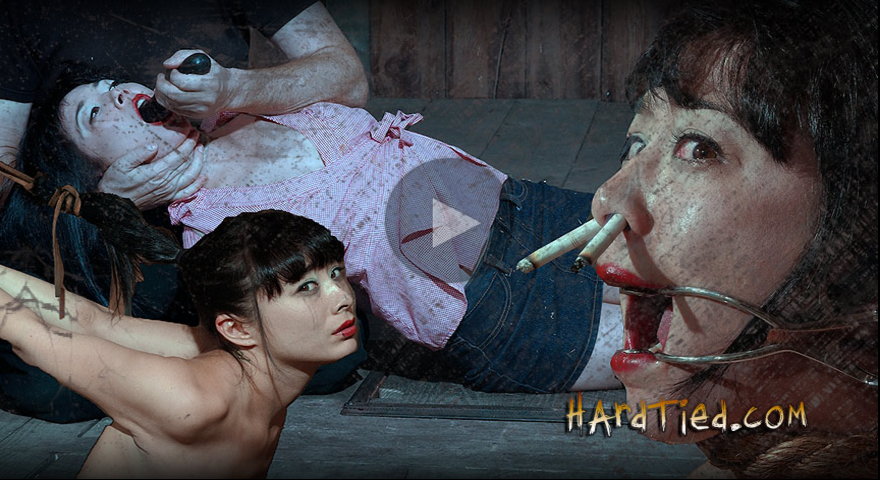 She posed in front of me. “Don’t go away”, she laughed, and waved the cane in my direction. “First I have to deal with Helen, and then it may be your turn.”

She left me there, leaving the door ajar, and I listened in amazement to quiet, timid Emma as she showed me a totally unexpected side of her character.

“I am your worst nightmare, Helen. Michelle may not be willing to punish you, but I have been waiting for an opportunity to have you at my mercy for months. This cane is going to caress you like a lover.” There was a sharp crack, followed by a squeal. “Did that hurt? And it is only a start. You can see the cane can’t you, and you will know when you are about to receive its kiss, won’t you?” There was another crack and a squeal.

She carried on tormenting Helen, for four more lashes, but this took almost a quarter of an hour. I was exhausted just listening to it, so heaven knows how Helen felt. Then Emma came back into my room, and I flinched away.

“Don’t worry,” she smiled, “I know how you feel. Helen liked every minute of it, and I know you wouldn’t.” She tossed the keys on the bed and left me. I quickly unlocked my fetters, and went out in time to see Emma finishing untying Helen, and re-tying her wrists once she had unfolded.

They then both disappeared into Helen’s room, and it was some hours more before I saw them again.

They are now a couple, and anyone who saw them together might think that athletic, extrovert Helen was the dominant partner, and timid Emma the subordinate. Only the three of us know different.