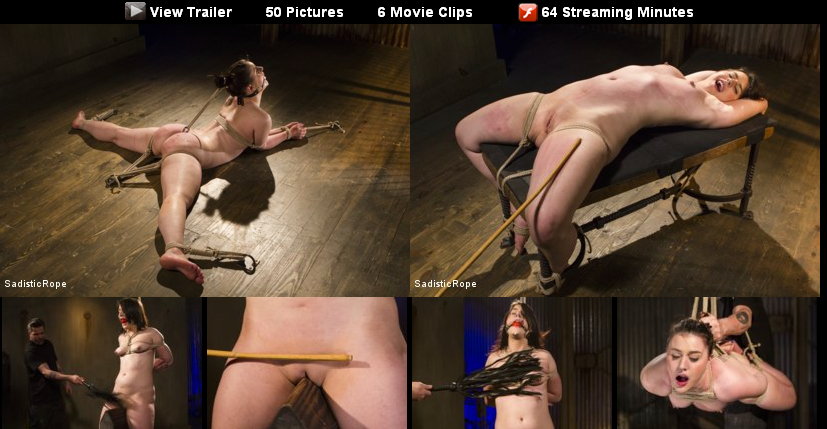 Exhaustion threatened her. Unable to deviate from her current task the bizarre black figure trudged on. Around and around the arena, locked to a long metal arm attached to a sturdy centre post. A task of multiple purpose, the first to retighten a heavy spring that supplied 24 hours of emergency power in the event of power outages; which happened often living in rural Canada. The second was the bizarre workout she craved and third was her pleasure from that workout.

Unfettered it would take her an hour to wind the spring up. Of course that was no challenge and with that in mind our heroine had added quite a number of interesting things to her workout. First she had donned a thick tight black latex catsuit complete with gloves, booties and open-faced hood. She had needed a jelly lubricant to work her way into the shoulder entry outfit. The catsuit had two strategically placed sleeves that demanded entry into her private parts. The sleeves also allowed for certain objects to be inserted into them.

Next she added a long stiff corset of black rubber. With practised ease she tightened the garment around her torso wrapping herself from just below her large breasts to mid thigh. It took time but slowly our deviant girl tugged the lacing as tight as she could. The laces she had used for this were thick leather laces that she had soaked in water before starting. This meant that as they dried they would further tighten the strict garment.

Over this she added a wide belt with chains that were run through her crotch to the back of the belt, these she pulled tight and padlocked in place. Next she pulled on a latex hood with only a pipe sticking out of it. Now she was blind. A wide collar secured the hood on and she filled the inflatable item adding pressure to her face and head. To this she locked another bar attaching it to the chains running between her legs to the back of the collar. This effectively stopped her from bending over.

Fumbling blindly she found the steel bar, which was set just above waist height and locked its chain behind her to the bar between her legs. This would put a constant pull on the plugs buried deep inside her as she pulled the bar around rewinding the spring. Almost done, she opened the zippers over her breasts exposing her nipples and attached weighted clamps to each one. To the front of the belt she attached a ring of keys that would open the various locks she had used to this point. To a ring in the front of her high collar she attached the centre of a short chain via padlock. Fumbling she attached wide leather cuffs to each wrist and then she pushed the wheeled table and bag away from her. She had two special locks remaining clutched in her grip. Our heroine hesitated at this point, she could still release herself and just rewind the spring without the fetters but that would be no fun.


Taking a deep breath through the tube protruding from her inflated head she attached first one wrist then the other to either end of the chain hanging from her collar. The locks were remote controlled the bound latex covered girl had to finish rewinding the spring in order to set off the release switch for the locks. Her hands held well away from the ring of keys at her waist she was stuck. She had to finish the workout she had laid out for herself in order to gain freedom.

The deviant girl knew from experimenting that it would take her at least two hours to rewind the spring with her ankles locked to the short bar. What she had not tested was how much harder it would be dressed in heels or with her little friends imbedded in her. She had also not tried it blind. With that in mind the bizarre creature’s workout began.

Our hapless heroine had no idea of how long she had been shuffling in a circle. She did however know that her privates were sore, as were her tortured breasts. The workout was proving more than she had bargained for, having had numerous climaxes. Wishing she had put a little more thought into her workout, she continued to trudge forward. It was getting harder and harder as the spring tightened to move ahead.

Each step caused the intruders to bump against each other through the thin membrane separating them. This in turn created the desired effect in her nether regions and rekindled her passion for climax. Each step also caused the nipple clamps to bump and swing adding to her torment. Pain, pleasure, build up and release. The cycle continued step after step. She could not stop for long rests as the spring threatened to pull her backwards as it needed to hit the end to lock it in place.

The closer she got to the end the harder it was to move forward. She found herself leaning forward against the backward pull of the spring, which in turn added stress to the plugs buried in her. Time was an alien concept now. Enclosed in her latex hood, she could hear, see, smell and taste nothing. Frustration built inside her. She wanted out. Shuffle, shuffle, and stop. Shuffle, shuffle, and stop. The cycle continued. Bump, bump went the invaders. Again her sex responded to the constant stimulation. Again she climaxed, not as violently as her first but climaxed nonetheless.