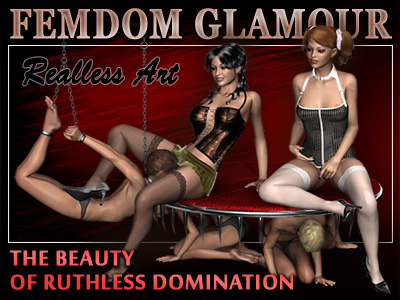 ...a "Neutral Scene" or a "Snapshot." Basically, it’s a short exchange, which in itself is meaningless - or rather, could mean many different things.

The challenge [snip] is to create the history behind the scene, and it teaches [snip] just how much (or how little) words themselves can mean.

So anyway, I was bored at work today, noodling around with what a snapshot spanking story would be like.

Quietly. "Did I ask you if you wanted to?"

A stab of remorse, a flush, a hint of fear.

Head down. A furtive glance. Knowing.

"You’re going to follow the instruction. Don’t make me repeat it. Then I’m going to give you what I promised you."

A heavy nod to the inevitability.

"Then you’ll pick up the phone and let them know that you’ll be late."

Head up, wanting to protest, knowing better. Fighting it, winning (just barely), surrendering. Settling back to hear the rest.

"And then we’ll have a little lesson in obedience."

She closed her eyes, letting herself feel the support of his lap, his chest, his arms one last moment, and then, with a quick hug, he took his arms away. Now, Carolyn, he said, and she slowly stood, aware of how very few steps it could take her to run out the door. But obedient.

She shouldn’t have pushed him. But she had been so sure, so sure, that he would never really spank her here, in the party suite. No, it wasn’t as exposed as at a party of vanillas, but he had always been so private with her, sometimes bouncing her on his lap a little in public, but never really exposing her. She had been certain he never would.

Who should she ask?

It didn’t matter. It would become public within moments, and more fuel for the easy hilarity of the party. She’d have to laugh herself and play the good sport. Not easy. Not easy at all with the arousal and embarrassment fighting for attention.

The middle-aged guy. It might as well be the kind of jeans belt she liked.

"Ah—I have to ask you something." Go for soft plead. Maybe he would keep quiet. She squeezed out the words, one at a time, like a nervous kid in front of a rowdy class. "I’m supposed to ask if I can please borrow," deep breath, "your belt. Please. So he," furtive wave in the direction of the couch, "can. Spank. Me." She did her best to look vulnerable and appealing.

"OHHHHHHHHHHH...and just what did you do to deserve that, young lady?" Oh, God, she would have to ask one of the young-lady types. And sure enough, the conversation halted in mid-roar as he began to unbuckle his belt.

"I disobeyed," she said, in a small voice, mentally kicking herself for not playing the smartass instead, and getting the laughter going again. The silence now was heavy with expectation.

He slowly pulled the belt free, and she shifted a little, one foot to the other, then took the belt into her awkward hands. She was damned if she would double it for her lover, her unreasonable, unpredictable, unbelievably sexy lover, but she didn’t want to drag it on the floor, either.

She wound the strap around her hand, then brought it to him, kneeling in front of him, just as he had ordered. He held his hands out, a few inches apart, and suddenly the room disappeared for her. She unwound the leather. Doubled it. And laid the belt in his hands. And lost herself in his breath, still steady under the quickening of her own. No other breaths. No one else was there, not any more. Words, hoot, laughter—all as distant as if she were underwater. Submerged.

He sat back and patted his lap. She rose to her feet, then knelt next to him on the couch, grateful for the chance to lay across him and hide her face in the circle of her arms. She crossed and uncrossed her feet as he raised her loose denim skirt, then ran his hand over her pantied bottom. Please. Please. Please, she begged silently, and then breathed in relief as he moved his hand away, leaving her panties in place.

As if he wouldn’t find a way to get those sounds.

"Ohhhh..." she couldn’t keep back the moan as the leather struck again, the same spot, again. She hated this. She must hate this. How could she not hate this, again, again, the heat building, could fire itself really burn more? Her ankles stopped crossing and uncrossing to try to lock against the pain, but the belt across her thighs unlocked her ankles and voice together, please, oh, please. Moan and grunt and cries on the verge of tears. Little shrieks when the belt returned to stripe her tender thighs. I’m sorry, I’m sorry, I’m sorry, when the strokes got much slower. Much harder.

And then it stopped.

She lay there and shook as his hand caressed her neck and shoulders, rubbed the tension out of her back.

You have a phone call to make. Do that now, please, would you?

As if she had a choice.

As if she wanted one.

She got up, even more awkwardly than usual as she tried to keep her face averted from everyone. From every direction. Now the chatter and laughter were mercilessly clear, but she couldn’t be a good sport after all, couldn’t do anything but be the spanked object of comments she would never remember.

She shut the door to the bedroom, and made the call. Yes, sorry, I’m running late. If I’m not there, have dinner without us. Of course I want to see your new house! We’re both looking forward to seeing you this evening, and I’m sorry we’re a bit stuck at this party. Thanks for understanding. Later, then.

Her fingers were shaky on the door knob. How much later?

And how much more before he was done with her?

Back through the crowd. Back to where he waited on the couch. Back to the refuge of his lap. Back to the circle of his arms.

He stopped her in mid-whine. Carolyn. I want you to pick the three implements you most fear or dislike, please. Whether you’ve felt them before or not.

Oh, God, no, she couldn’t take those. Not any of those.

Never all of those.