Trudy fell off the back of her husband’s motorcycle and onto the driveway in front of their house one morning. The bike wasn’t even moving at the time, but she had her helmet in one hand, rather than on her head where it belonged, and that was where she landed—right on her head. Her only memory of the incident, oddly enough, was the hollow bang and clatter of that helmet hitting the concrete beside her, and a clear image of the silver oak tree in their yard, with its leaves shimmering in a slight breeze against the glorious blue morning sky. Everything else was a blank.

It was a silly thing, she would say later. She just hadn’t been paying attention. The results, however, were not silly at all. She had fractured her skull and was severely concussed, unconscious for three days, and when she woke up, she couldn’t remember her own name, or much of anything else, come to that. She was lucky to be alive, as the doctors pointed out to her on more than one occasion. She didn’t feel very lucky.

Over the long months of rehabilitation, she learned to tie her shoes again and to walk and brush her teeth and shave her legs without slicing herself to ribbons. There were short-term memory deficits and headaches to cope with, and occasional blonde moments, as she called them, when she would forget what she was talking about between one sentence and the next.

The truth of it was that she would never be quite the same, although she would continue to improve. After a year, with her husband’s unflagging and selfless commitment to her well being, she was fit again and managing reasonably well, which was as much as anyone could hope for. She got to where she could wear high heels again, and drive and even go to work on her own. Those were all great successes, but there was, nonetheless, a sense of melancholy about it, too.

She regretted the things that she had missed, and had some deep-seated rage about the things that she would never be able to do. Those feelings showed themselves as resentment, and unfocused anger. Trudy had always been sassy and assertive, but circumstances forced a dependency on other people—her children, the doctors, her husband—most of all her husband. She hated that. The two of them had always been partners, and she prided herself on being his equal.

But after the accident, Adam did everything. He took care of the house, paid the bills, shopped and cooked for her—treated her, in fact, like a porcelain doll—as if he was afraid she would break again. She thought of that as a burden on him, and a failure on her part. She became waspish and argumentative.

On the anniversary of her injuries, when he had gotten thoroughly fed up with her constant whining, Adam took Trudy over his knee and spanked her. It wasn’t one of the friendly Friday night varieties that she was, in fact, rather fond of. It was something else entirely. He didn’t ease into it as he usually did, didn’t warm her up with gentle smacks of the hand that got harder and more urgent as he went along. No, not at all. He was much more direct, and very blunt.

“You’re hurting me,” she hissed, expecting him to sigh and step back, as he had been doing for months. “Stop it right now.”

“Don’t say another word.” His voice turned fierce, harsh and commanding in a tone she had never heard from him. “This is for scaring me half to death last year, and for being graceless enough to bitch about it, and maybe because you’re just asking for it.”

He didn’t stop for a long time, until he was sweating from the effort. All of his fears and frustrations and outrage seemed to channel through his body and vent through the flats of his hands. The spanking was brutal. She fought him, grimly at first, stubborn and willful, but he held her, ignoring her muffled protests. She clawed at him until he tied her hands behind her back, then kicked and wriggled until he tied her legs, too. Nothing she said or did seemed to make any difference.

What infuriated her most of all was that the humiliation and stinging pain had a distinctly sexual flavor, right from the very start. It turned her on just as certainly as flipping a switch. Her nipples hardened and rose, and the slow familiar tension in her belly began. Wetness bloomed between her legs, and her breathing tightened with the unbidden excitement. After the initial surprise at her own response, she tried her best to resist the betrayal of her body, and fought against the stealthy arousal as hard as she fought the ropes that bound her. 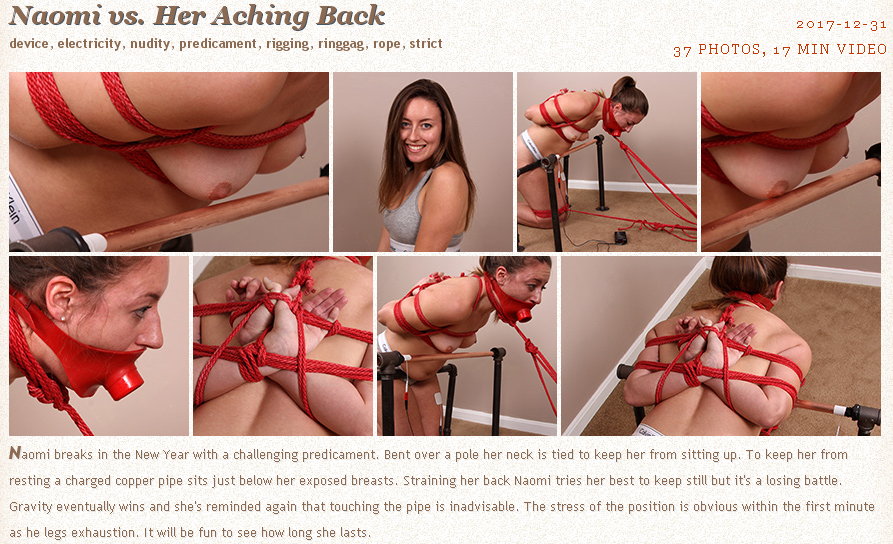 What was the point? She kept wondering. Surely he didn’t think it would prove anything to her. Who the fuck did he think he was?

But in reality, none of that calm voice-of-reason stuff did any good at all. Her body writhed under the punishment and after awhile, in spite of her best efforts to the contrary, her helpless thrashing stopped being any form of protest. Her movements turned wanton, instead. Her hips bucked and the sounds in her throat were urgent with need. And there wasn’t a thing she could do to stop it.

Afterwards, he held her, gentled her, and finally made the best love to her that she had ever had in her life. He didn’t untie her, or ask her permission. He knew what he wanted, and seemed to know exactly what she needed. He kissed and licked and pinched and bit until she was quivering and gasping, and then he fucked her with hard piston strokes and it was like nothing she had ever felt before.

When it was over, she pretended to be angry. She was so embarrassed that she couldn’t think of what else to do, but he saw through it immediately.

“Mind your manners,” he said, and swatted her a good one for emphasis.

Her behind was mottled from pink to deep red, and so sore that the single, tingling slap of his hand made her burst into tears. And worse yet, drove her into one more orgasm. She arched her back, disbelieving, and cried out as the final muscular convulsion swept through her. Then she collapsed, utterly spent, into his arms.

“We’ll have to see.” He stroked her hair and kissed her.

“You’re scaring me.” She sniffed and swiped at the tears. “Am I supposed to be scared?”

“Has it got anything to do with making me cry?”

Trudy sighed. “I think that means yes, doesn’t it?”

A part of her wanted to snap out a reproach of some kind. Would she mind? Of course she would mind. What kind of question was that? But the way he looked at her gave Trudy pause. He looked satisfied, and that was exactly how she felt, too. In fact, she felt wonderful, and there was simply no way to deny it.

She thought about it, and her eyes widened as she realized that Adam wouldn’t have been able to do what he had done without her. Well, of course not, dummy, she said to herself. Who else’s butt would he have waled on? It seemed obvious on the face of it, but there was more to it than that. She had yielded to her own sexuality, to her own needs, just as certainly as she had surrendered to Adam’s punishment. And that meant that she wasn’t a victim at all. She was an accomplice.

“It’s…complicated, isn’t it?” she said finally.

“Or not,” he replied. “We’ll just muddle along like we always have, Trude.”

“I’m too tied up to muddle” She couldn’t quite stifle a sudden, slightly unstrung giggle.

“None that I can think of,” she replied, looking him right in the eye.