Michelle Devaux was a bitter 42-year old divorcee. Her husband left her a year ago for a much younger woman and Michelle began focusing her anger on Karen McPherson. People thought Karen was a lesbian simply by the way she dressed and looked, and Michelle was relentless in referring to her as a 'butch dyke' and being rude to her whenever she saw her. Other people thought Michelle's behavior was beyond rude, and disgusting.

As it turns out, however, Karen actually was a lesbian and when she got hold of personal and financial information that would ruin Michelle, she jumped on the chance to get even with the 'fat bitch’ who had been tormenting her! Karen began spanking Michelle on a regular basis. At first just over her panties, but within a week she was putting the 'fat bitch’ across her knees, naked, and spanking the daylights out of her chubby red ass until Michelle would sob and beg like a school girl for mercy. She was also turned into an expert ‘pussy ticker’!

Michelle now lives in Karen's apartment and is always naked, no matter who else is visiting! Karen delights in inviting people over who Michelle disliked so they can witness her frequent spankings. She often has Michelle's ex-husband and his 27-year old new wife over to laugh at her and even spank her themselves! It's always a fun time, with Michelle serving both her ex-husband and his new wife, completely naked of course, and performing lewdly for their amusement before laying first across Karen's lap, and then her ex's new wife's lap, for her severe spankings. She cries and sobs and begs while they all taunt her and laugh at her. The only sex Michelle will ever have from now on will be eating out Karen's pussy several times a day and playing with her own 42-year old sloppy cunt for her laughing guests whenever her 'owner' gives her permission. What a life! Hahaha! 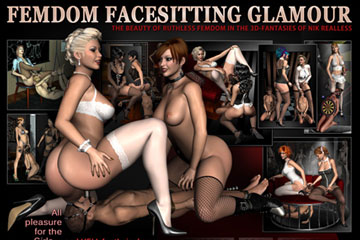