"Hello and welcome to the third round of elimination. Our contestants have been divided in three teams now. They've had their breakfasts and now we're about to bring them out so you can watch them prepared for another competition. But first.... "

Jeff moved over to a wooden packing crate. Inside was nothing but a thin layer of rice kernals. Then, at his signal, two of the assistants came out carrying Mingmei and it was obvious that the rope-master had been allowed to enjoy himself. One camera made a slow circuit so that all of her bonds could be viewed. All the rope used was rough hemp. The coarse rope bra was similar to the one she'd worn in the competition, but there were an additional two strand of rope added. These had been knotted and adjusted across her nipples so that rope was tightly against her nubs and the knots rubbed them with any movement. The rope bra's top was a pattern of knots that went over each shoulder and down to her arms which were bound with each wrist going to the opposing elbow. The cluster of knots between her shoulder blades led both to the upper arm bindings as well as to another loop of rope that surrounded her mid-arm. A belt made of several loops of the hemp circled her waist and had been knotted directly over her navel. Multiple strands ran from the front of the belt - the tighter inner ones were run up to her midarm tie. A few others were tied to the back of the belt to either side of where the inner ropes passed over it. All of the crouch ropes were knotted along the part of their length that cleaved her. Comparatively speaking, her legs were done quite simply with each leg bound ankle to thigh, but instead of just doing one loop of rope, the rope master had one loop just above the knee and another around the ankles/upper thighs and between the two, a pattern of knotted ropes - almost a hemp fishnet that encased each leg in its snug embrace. Extra rope ran down from the knees ties and had been formed into a loop.

Even her head had been encased in the thin, rough rope. A white piece of raw white silk had been put across Mingmei's mouth and then tightly cleaved with rope - and not just cleaved. The strands had been wound around her head until they filled her mouth up to the level of her lips. Another folded piece of silk over her eyes was also pinned by multiple strands that covered all but the tip of her nose and ran from there to halfway up her forehead. A rope 'necklace' rode under her chin - four knotted strand ran up across her mouth bindings, split so that two ran on either side of her nose and went up to the top of her head. Strands also ran up the back and along both sides, with the strands dividing to go on both sides of her ears. All the strands were knotted together at the top and then formed into a loop like the ones below her knees.

"As requested by our prize winner, strict rope bondage with a bit of rice to keep her entertained in transit."

The struggling Mingmei was lowered into the over-sized crate breasts down, then a pair of u-shaped nails were put through the loop at the top of her head and carefully hammered into the front of the crate. The knee loops were similarly nailed to the sides, keeping her well spread but still able to squirm around. And between the knotted ropes and the rice, she was already squirming.

"She's on her way to your drop-off point - congratulations again, DrDevice. And now, on to today's elimination round.

One camera shifted to the entrance of the holding cell area as five women were starting to emerge. No ropes this day. All were fully nude and on each woman, her wrists were attached to the corresponding ankle by cable tie. They moved awkwardly with their bare ass cheeks in perfect position for their herders to deliver a stinging blow to keep them moving. All of them had bridle gags inserted - for reasons that became obvious later.

The water was already flowing in the open bay and the attendants used buckets and sponges to wash each woman with extra attention given to between the legs.

After they were toweled off, they were urged up a ramp and onto a small stage where Jeff was already waiting and addressing the camera.

"Today's handicap should be a real distractor for our contestants. Let's bring one of the first group up here so our viewers can get a better idea. Yes - she did so well yesterday, let's bring Mia up again."

Jeff smiled as she was prodded over into position. There had been some argument a first about the show being paced too quickly, but he had aruged for speed. This wasn't a show on breaking slaves - this was a show to appeal to the true basic desire of all the SSK membership - the hunt. Whether the members prefered to be hunter or prey didn't matter, he felt it was the addictive rush of the hunt that was the real lure. And broken women? Like seeing someone going out to hunt rabbits when what you craved was a tiger hunt. And Mia - a definate tigress. Even now, she was managing to glare at him.

"Whoa - look how anxious the little vixen is to get into her gear. Help her out, boys, while I explain the special features of this little number to our viewers. First off, both front and rear devices are live and naturally equipped with long-life batteries. We tested the brand in similar equipment and got a full six-hours of service from them. But the added bonus is a little device our research department came up with - a motion sensative control. What does that mean? That means that the faster our girls move, the faster the speed of their internal toys. Their wrists will all be cuffed to the sides of their belts to prevent any interference with the straps. Oh - and if that isn't enough for them, we have one more wardrobe addition. They all get a set of clover clamps on their nipples as incentive. I'll explain to you and to our contestants what that incentive is once our five contestants have all been properly outfitted. While we watch, let's see who is in our first group of the day."

"Mia, of course, we've already seen. We also have Vinita with her lovely olive complection, short, black hair and golden brown eyes - Marissa, rather an Irish complection with dark brunette hair and striking green eyes - Marjani, sort of a light nut shade of skin tone, very black hair. Her eyes may look black as well, but they're an extremely dark brown. And finally Jessica, lightly tanned all-over, shoulder length brunette hair and grey eyes. Oh - and as an added note, Jessica here was a last-minute substitution. She's the one that got the call to replace Rebecca after she read the contract. Lucky girl, eh?"

"Now about that incentive. Our three losers today will be keeping our audience amused by having their nipple clamps chained to the front of an automatic treadmill. The loser among you will have to either keep up with the belt - and crank up the power on your toys in the process - or have your nipples tortured beyond your ability to imagine right now. So let's see some enthusiasm for staying to the front of the pack. Because today, you will be in a pack. Gentlemen, let's get our contestants loaded and make room for the next group to be prepared." 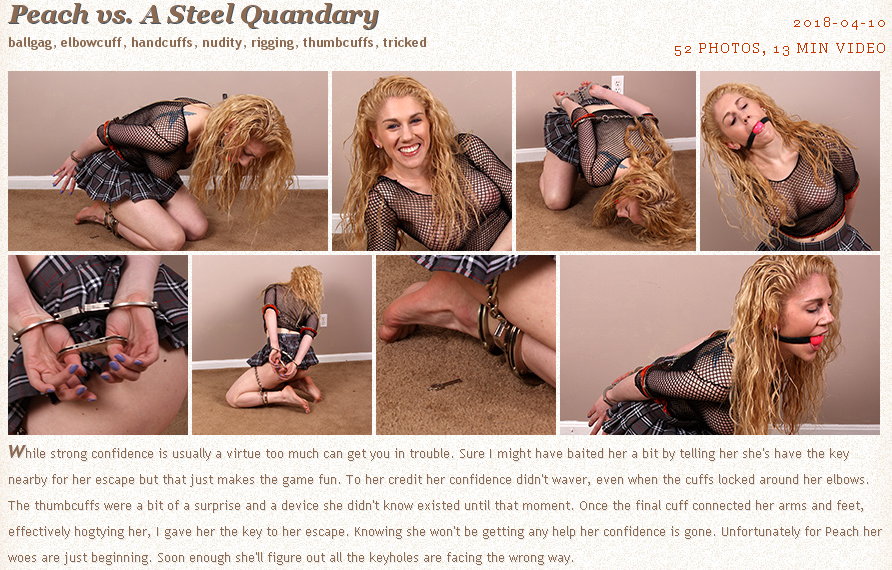 Instead of the area they had gone to on the previous two days, the van took them to a race track like the kind used for horse races. Once they had been forced onto the track, the cable ties were finally cut and the five allowed to straighten.

"I suggest you work your kinks out and stretch. This is a mile and a quarter track and you get to run it. You already know part of what will be happening to the loser, but as an extra incentive, the one of you that finishes in first place will get to spend the evening in no bondage beyond a hobble in the hotel where you spent your first night and you will get any meal of your choice. After two nights of oatmeal and applesauce washed down with lukewarm juice or Gatorade followed by a night on a thin mattress over a wire frame, I'd have to imagine that would be pretty appealing. An entire night gag-free, well-fed and in a comfortable bed - the prize for being the first one to cross the finish line."

"SSKers - we're making winning a little tricker now. The member that comes closest to guessing the finishing order of the three races will be our winner today. You have two minutes to enter your choices for this race."

During the two minutes, each of the women was offered a sip of lukewarm Gatorade through a hard straw worked around the bits in their mouths before being herded to the start/finish line.

"All contestants are on the starting line.... go!"

Even though they were at opposite ends, Jessica and Mia seemed to have similar ideas. Mia lowered her head and charged into Vinita, shoulder checking the woman in the ribs so hard that she fell over sideways and struck Marissa. On the other side, Jessica had gone with simply tripping Marjani before taking off.

Knocked to the ground, both Vinita and Marjani were having problems getting back to their feet without the use of their hands. Marissa had fared better - she'd been staggered but managed not to fall. She took off after Mia and Jessica, but the two were already well in the lead.

For speed, Mia and Jessica seemed remarkably matched, though the escalating movement below their waists were starting to take its toll. Both were stopped within five feet of each other when an orgasm hit. Recovering first, Jessica took the opportunity to try to knock her nearest rival out of the race.

Mia was knocked off her feet, but not knocked far enough away. With admirable agility, she scissored her legs and managed to return the favor of knocking Jessica down. The two of them tussled together in the dirt, each hampering the attempts of the other to rise. They only stopped when the sound of the gong startled them. While they had been fighting, Marissa had made it past with no interference and crossed the finish line. Viniti was still at the start, but Marjani had managed to get her feet under her and was even now passing Jessica and Mia.

With the prize lost, the only goal now was to avoid punishment, so Jessica and Mia ignored one another to struggle back to their feet. Back at the line, Viniti finally gained her footing and was proving to be a fast sprinter - fast enough to set some panic in on the two women. They managed to get standing just as Viniti reached them. Jessica shoved into the passing woman and staggered her. Mia finished tripping her back to the dirt before starting to run again herself. Viniti never made it back to her feet again before the race was over.

As the dust covered and sobbing Viniti was picked up and carted away to be changed to the treadmill, Jeff was laughing.

"Was this a variation of a pony-girl race or Roller Derby without the skates? Let's see if our other two races prove to be as exciting. Remember to register your call on finishing orders so that you have a shot at today's prize."