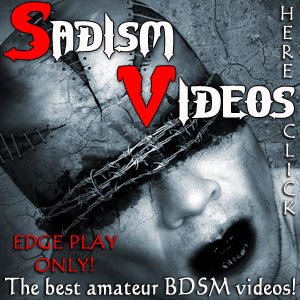 Not the same as a rodeo hogtie. The human hogtie has the knees bent, with ankles connected to the upper body (usually the wrists). The hogtie is usually presented with the captive face down, but they can also be kneeling upright, as well as other variations.


SPREAD-EAGLE. Any bondage position which extends the limbs away from the torso.

Standing Spread-Eagle: same as above, only upright.

Eiffel Tower: legs are apart, but wrists are together above the head.


Suspension bondage safety
Who Can Be Suspended?

SUSPENSION
Sometimes refers to any part of the body lifted off the ground, but really should only be used for bondage positions where the whole body is off the ground. Suspension by the wrists is very unnatural for the wrist-bones, is moderately to extremely painful, and is usually possible for only a short while.

Inverted Suspension: upside-down, by the ankles; can be done more comfortably, but adds extra risk since a fall would be on the head. The captive often gets a giddy, giggly head-rush.

Hammock suspension: wrists and ankles, with the unsupported torso sagging down in the middle like a hammock.

Breast suspension: supporting the body weight from the breasts can permanently injure the breasts; the only reason you see Japanese photos of this is because those men don't care whether they injure the captive. (Do you think a rational woman would want to string you up by only your balls?)